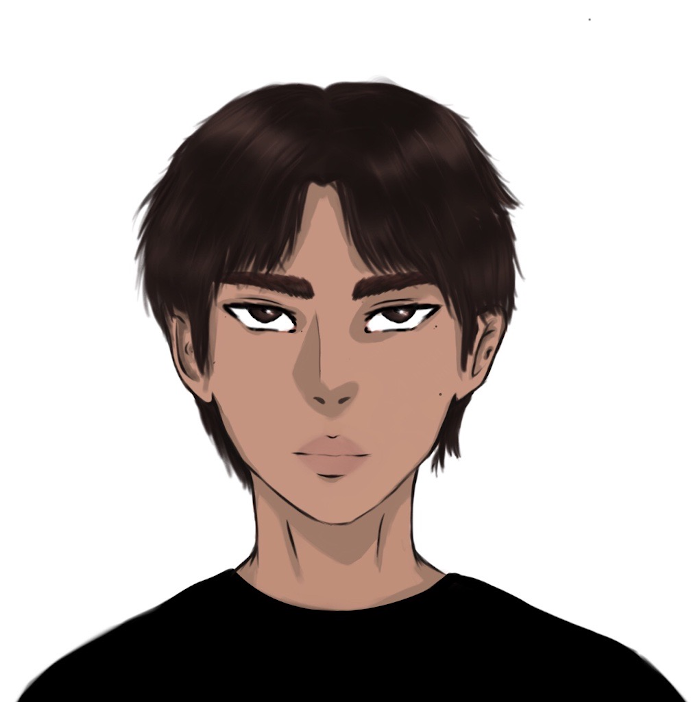 "Go back to your own country!" shouted one child after spitting on him. "Stupid foreigner," said another child. The kids formed a circle around him calling him names and being racist. "Guys, he is going to bomb us if we make him mad, hahah," a girl from one side of the circle said. He broke down into tears wishing that he was white and not a person of color. One of the many bad experiences Akram had in his childhood.

Now he‘s 15 years old and is living with his parents and his younger brother and sister. Akram is a good-natured boy and a straight A-student. In his childhood he was often bullied by other kids, because he was simply a foreigner. On top of that his parents always prioritized his siblings because they are younger than him. They always took care of them but Akram was unregarded and wanted to talk to them about being bullied but they never listened. Ever since then he was a quiet and introverted child.

He’s sitting in class listening to the teacher, writing down notes when suddenly he gets a phone call by an unknown caller. He excuses himself and leaves the classroom to pick up the call. The caller is a police man. He tells him that his parents had a car crash and are in a critical condition. Akram hangs up the call and goes back to the classroom, there he packs all his stuff in his backpack leaving the classroom. "Where are you going? You can’t just leave the classroom!" says the teacher. He replies nothing and leaves the school. Since he lives in a town where there’s only one hospital he automatically knew where to go. Arriving there he asks the woman at the reception if two people with the last name Mekka were brought to the hospital. She answers "Yes, they are in the intensive care unit but you can’t visit them." Akram doesn’t accept that and tries to convince the woman to let him visit his parents. He starts to scream and bangs his fist on the table. The woman from the reception threatens to call the police if he continues to scream. Akram apologizes and leaves the hospital. He goes home and thinks about the things he did today. Usually he doesn’t act out like that and he is surprised about himself. Arriving at home he explains to his siblings that their parents are in the hospital and that they are in a bad condition. His siblings start to cry and run into their room.´

Akram doesn’t go to school for a couple weeks. During the time where he doesn’t go to school his parents have passed away. Akram’s uncle get custody of all three children and they move to their uncle and aunt. The funeral of his parents occurs one week after they move to his uncle but Akram doesn’t attend the funeral. When he goes back to school he is a different person. In school the people gather around him asking him if he is okay and how he feels. Akram ignores all the voices around him and pushes his way through the crowd. While walking through the crowd he has flashbacks of his childhood and the moments where he was bullied. On his way to his classroom somebody bumps into him. This is the last straw for him. Akram screams: "Who do you think you are?!" He pulls the person that bumped into him on their collar towards him and lunges out for a punch. However his hand never reaches the person's face because somebody else stops his hand. When he looks to the right to see who stopped him he sees that it is Mira. "What happened to you?" she asks. Akram is embarrassed that she has to see him in such a vulnerable state. Mira asks her longtime friend Akram to come with her to a quiet place to talk. Arriving there she asks him: "How are you really feeling?" Akram doesn’t say anything at first but then he opens up to her and tells how he has been feeling for the last couple of weeks. "I’m sorry about what happened to your parents. Do you want me to help you?"