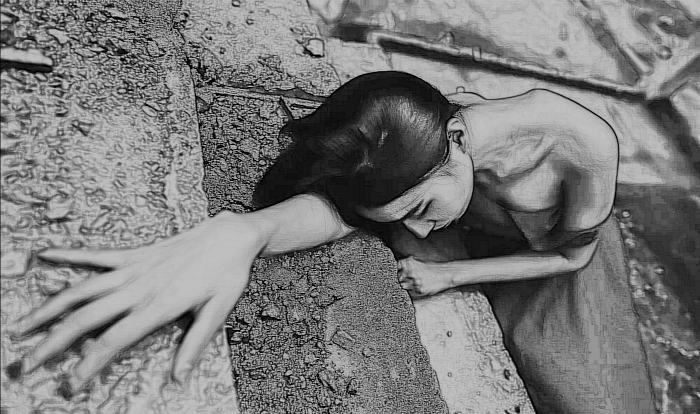 I stared blankly at the middle-aged male doctor wearing glasses. He walked up to me alone and told me a lot of obscure things, such as induced delusional disorder, people in the supermarket were affected and caused collective hysteria... These things he said are completely different as what I understood and guessed before, and it was really hard for me to be sure if I understood all.

Just when I was puzzled, I suddenly heard a policeman in a leather jacket not far ahead using his cell phone to report to someone: "A boy has come out of the supermarket."

With the male police officer was a young policewoman. They walked to an ambulance and said to several nurses: "This old lady is probably the only person in this supermarket who has not been affected. She is a deaf and mute person. I can a little sign language, and I just communicated with her, and she told me with gestures--the people in this supermarket were crazy and were constantly killing each other!"

I stared at them blankly, my mind was in confusion—deaf and mute? That old lady turned out to be deaf and mute! No wonder she never said a word to any of us, why didn't I think of it before? The policewoman said that she was the only person in the supermarket who was not affected. What did this mean? My mind was getting confused and I couldn't understand everything at all. At this time, I thought of the murderer again, he has not been caught yet! I yelled to the male doctor in front of me: "Where is that boy? You can tell the police to catch the boy! He is a murderer!"

The male doctor frowned and asked questioningly: "What did you say...a boy? Why, are there any other boys besides you?"

I was completely stunned--what was he talking about?

The male doctor was stunned again when he saw me. He probably thought it was very difficult to communicate with me, so he said, "Why don't we go to the hospital first? Or, you tell me who your parents are and where do they work?"

I stared at him like a foreigner, but he continued to ask: "Why don't you tell me which middle school you are studying in?"

This was a strange and horrified feeling--I was sinking slowly in an ice cave in an icy world. First, my feet froze into ice cubes, and then gradually upward, the cold air spread to the entire limbs, freezing my blood and thinking. I have completely become an ice sculpture that think. After a while, something seemed to crack in my mind. This was caused by a sudden thought. Driven by this thought, I suddenly went crazy and staggered towards the police car nearest to me. In the rearview mirror on the left side of the police car, I saw the person in the mirror——

It was the face of a teenage boy, exactly like the boy I saw in the supermarket!

All of a sudden, I understood everything. As the world was spinning around, some fragments that happened in the supermarket reappeared in my mind like a fast-playing black and white movie——

"You know? I have a daughter who looks about the same age as you. So, seeing you makes me feel kind." (Middle-aged man)

"The most important thing at the moment is that the ten of us must be united..." (Middle-aged man)

"Actually, I have been a little skeptical, but I have been holding back without saying it, but now it seems that the murderer must be that boy..." (Female clerk)

Accompanied by these memories were the answers to all my previous questions. At this moment, my mind was suddenly very clear, making me understand everything--on the night of the accident, I went to study in the evening, and when I came out of school, I went home with a magazine while reading it. When passing by this supermarket, I walked in. Even when I was waiting in line to pay, my whole body and mind were still immersed in that wonderful story. The story was written so well, called "A Single Woman's Life in a Different Place", I was completely brought into it by the author's writing. Until the man with the gun broke in and threatened us not to move, the book in my hand fell to the ground. But I was completely unaware. After being extremely frightened, my brain was in a disorder, and then I became a "single woman living in a different place".

And what happened in the supermarket in the next few days, I also understood--the unreasonable strong man desperately wanted to smash the door out the next day, and I was opposed to this; the fat woman swore investigating who the murderer was, and saying that she has found a clue, this was obviously a threat to me; and the fashion girl was a time bomb, revealing the dangerous idea that she would use extreme methods to protect herself. How could you rest assured if you don’t solve her? Obviously, the "boy" living in my subconscious mind would not allow these threats to exist. "He" quietly got up and killed them with a fruit knife while I was asleep!

Now, I finally came to a terrible conclusion--the crazy murderer who killed three people in the supermarket was myself!

Now, my whole body was limp on the ground. What the doctors and policemen were saying to me was like a north wind whizzing by, fleeting. I didn't catch a word of what they were talking about. I only cared about one question in my mind now--what should I do? Tell them everything truthfully, let them know what happened in the crazy five days and six nights in this supermarket, and then confess my guilt? Of course, I believed that even if I didn’t say anything, they would draw conclusions from the on-site investigation and analysis. And, there was an old lady who has not been infected with the virus. She would also share everything she has witnessed in the past few days and "say" it out--what would happen to me then?

However, at least one thing was worthy of comfort--the world is still there, the flowers, trees, and all creatures are still alive, and I can see the sun rise again--maybe this is enough for me.